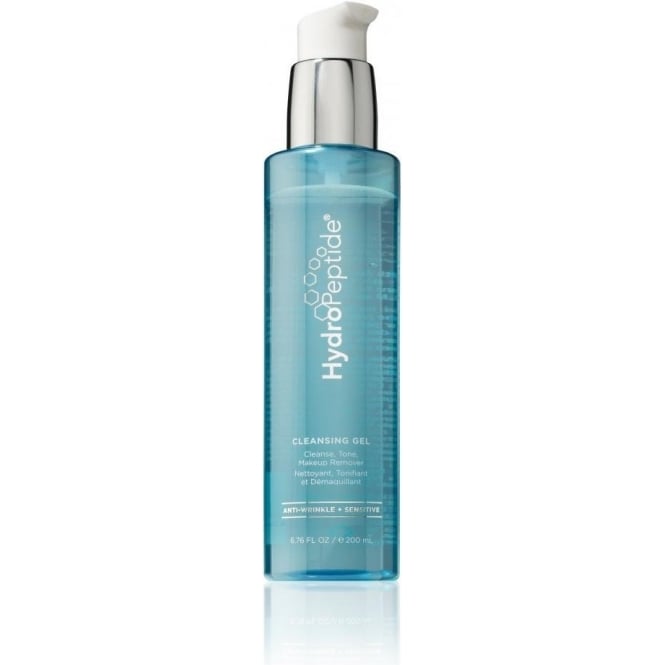 This amazing product from HydroPeptide is the ultimate multi-tasker. There is no need to buy a separate cleanser, toner and makeup remover as the HydroPeptides Cleansing and Toning Gel does it all for you, in one easy step. A 200ml bottle means this fantastic product is amazing value for money.

Specifically designed to cleanse, tone and remove makeup all in one gentle, non-irritating step. Formulated with Peptides for increased skin elasticity, Sebacic acid for a cleaner complexion and Apple extract for superior antioxidant protection.

Helps to reduce the appearance of fine lines and wrinkles, dissolves dirt and oil whilst decreasing excess oil production. Hydropeptide Cleansing and Toning Gel also removes bacteria and tones and balances without drying the skin.

Available in a 200ml bottle.

Suitable for all skin types including aging and sensitive skin. Key ingredients are:

In a recent consumer test the following results were reported by people who had used the product for over 2 weeks:

Designed to cleanse, tone and remove makeup all in one gentle, non-irritating step.

We use various Royal Mail services to deliver your order, these are dependent on the weight and value of your order.

You can track your order at www.royalmail.com/trackdetails. Most orders take between 2 – 5 working days to arrive, if you do not receive your order after that time please email us at sam@beautytimetherapies.co.uk.

All Environ, Youngblood & Hydropeptide orders placed before 3pm are despatched the same day, all Jane Iredale orders are despatched within 1 working day.

Under the Distance Selling Regulations you have the right to cancel your order for up to 7 working days after receiving it and receive a full refund.

If for any reason you are unsatisfied with your order, please Contact Us, quoting your name and the date ordered. We will do our utmost to try and resolve your issue. If we cannot, we will ask you to return the products to our Correspondence Address and once received we will issue a refund providing the items are unopened and undamaged. We do recommend that you send the items back via a tracked service.

Refunds are NOT given on any products that have been opened or/and used unless the item is faulty.

Funds will be credited into the same account that was debited.

If you wish to change an unopened item this will be done but will incur a charge to cover postage and packing plus any cost difference of the items.